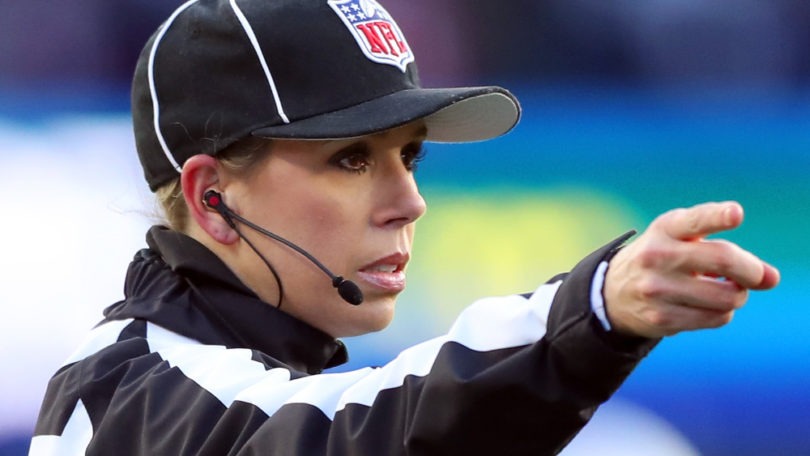 For the first time, a woman has entered the Super Bowl referees team. This is Sarah Thomas, who was already a referee at a game of the National Football League. The match took place on February 7, and NFL officials called Thomas’ appointment “a historic moment.”

The Super Bowl is not only considered a key event for American football. The game is watched all over the world, including commercials and celebrity performances.

The Super Bowl LV — the game for the title of the champion of the National Football League, was held in Tampa. The titleholders are the Tampa Bay Buccaneers, who beat the Kansas City Chiefs, and Tom Brady named MVP for the fifth time.

In the entire history of the Super Bowl, matches have never been judged by women. That changed in 2021 when Sarah Thomas joined the judging panel of seven.

Thomas became the first woman to judge the NFL playoffs in 2019, four years after she became the league’s first full-time official.

“Sarah Thomas has made history again. She became the first female Super Bowl referee. She has achieved this through professional work and dedication. Sarah deserves it.“ — Carl Cheffers, experienced NFL referee who has been refereeing for 21 years, says.

Sarah Thomas started working as a full-time league official four years ago. She began her path to refereeing in 2011 when she was the first woman to perform duties at the Big Ten stadium and where she worked as a line judge.

To her credit, Sarah is a competent judge, highly experienced, and has a long history of judicial practice. Thomas began her judging career in 1996 when she attended a meeting of the Gulf Coast Officials Association. In 1999, she hosted her first undergraduate school game.

Sarah Thomas is also married and has three children. It’s a fascinating thing, though, before becoming a judge, she worked as a pharmaceutical representative, but she calls refereeing her primary passion, and also says that while she works as a judge, she is always perceived officially and has no gender stereotypes.

Her new appointment forced the NFL to rename her refereeing position. Previously, the position in which Thomas worked was called the “head linesman” — this is the assistant to the head referee.

In 1920, when the world’s first professional American football organization was founded, matches were handled by a team of three referees: referee, umpire, and linesman.

This summer, the league moved line Judge Sarah Thomas, the first-ever female judge, to the opposite sideline. The functionaries were faced with a hard task: can a woman be called a head-linesman or should the clumsy term head-lineswoman be used?

The decision turned out to be asymmetrical: the NFL renamed the refereeing position, choosing a gender-neutral option. The Head Linesman will henceforth be called Down Judge — the duties of this judge include managing the counter of attempts, or down-box, after all.

It is highly encouraging that the National Football League has shown exceptional loyalty to equality for women in refereeing.